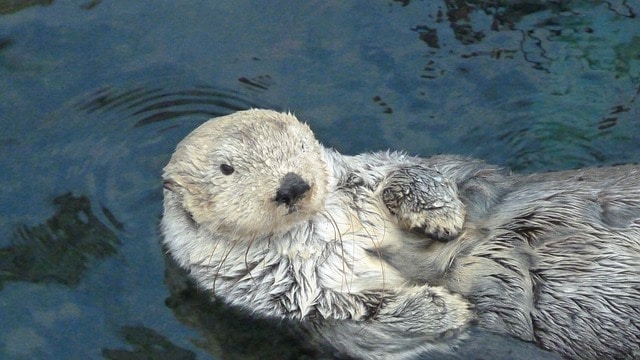 Have you ever seen an animal using a tool? That’s something you might see in a children’s book or a cartoon. But not in real life, right? Not so! Allow me to introduce you to the otter.

Otters belong to the weasel family and the subfamily Lutrinae and are the only weasels that live in the water. There are thirteen different species of Otter and two groups. The two groups are the sea otter and the river otter.

There are many differences between the two. First of all, sea otters are two to three times the size of river otters. Also, sea otters float on their backs, while river otters swim belly down. Another physical difference is that the tail of a sea otter is short and flattened while a river otter’s tail is long and pointed.

Northern sea otters are found only in coastal areas of the Northern Pacific Ocean. There are only 106,000 sea otters in the world of which 90% are found in the coastal waters of Alaska. Meanwhile, the river otter makes its home throughout North America in pond and stream habitats.

As you can see, otters live in wet habitats like freshwater rivers, lakes, marshes, and coastal waters. A river otter lives equally on land and water, making its home out of sticks, which it builds into a tunnel. Sea otters live on rocky shores and sandy sea bottoms as well as coastal wetlands.

Otters spend most of the day grooming themselves and swimming and eating--some of them eat while swimming on their back! Sea otters spend most of their lives in the water, where they breed, give birth, hunt for food, and sleep. River otters live most of their lives on solid ground and use the water to travel and find food. River otters are nocturnal, meaning they are active at night. Sea otters, on the other hand, are active during the day, or diurnal.

All otters hunt by movement and catch fish with their teeth. They use these strong teeth when fighting with other otters. A very unique trait of sea otters is that they use stone tools such as rocks to crack open shells while floating on their back. They also sometimes use stationary rocks along the shoreline as “anvils” to crack open mollusks, particularly mussels.

Otters avoid predators by fleeing, coming up on land. Some of their predators are bobcats, alligators, coyotes, and raptors.

Late winter or early spring, usually March or April, is mating season for otters. After mating, otters make a flat dry area where they create their nests. River otters have litters of one to three pups. The sea otter, though, gives birth to just one pup at a time.

Mother otters hold their young while floating on their backs. They hold the baby on their chest to nurse them and teach them to swim and hunt.

The river otter does not face population threats— their numbers are healthy. Sea otters, on the other hand, are a keystone species, essential to the ecosystem, and they are facing some serious threats! Its numbers were dramatically reduced by the fur trade. Today the threats to sea otters are reduced range, a shrinking population, and vulnerability to oil spills. Other dangers include white sharks, disease, food shortage, and pollution. Scientists say that up to 40 percent of otter deaths are the result of human pollution.

How can we help otters?

Of course, you can always donate to wildlife conservation groups that support otters like Defenders of WIldlife. You can also help keep ocean habitats and our planet as healthy as you can by taking measures like reducing water consumption, using less toxic products, reducing your waste, and more.

vamtam-theme-circle-post
 Category Activities, Essentials, Family, Urban, Young Naturalists
Nature offers us the most precious and vital gifts each and every day. But one...
Read More

The Secret Lives of SquirrelsAll Hail the Hedgehog